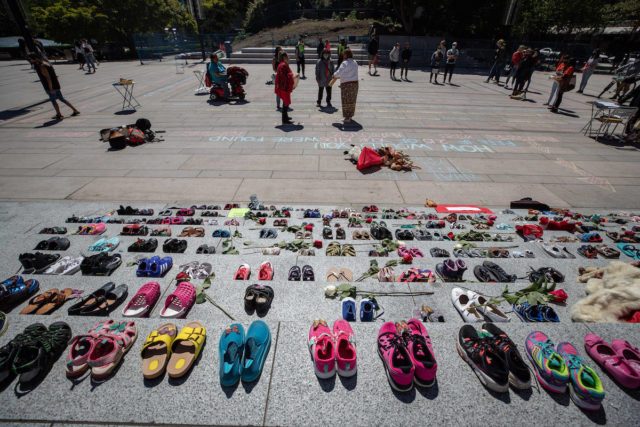 With more and less success, Canadians are attempting to reckon with the legacy of British and French imperialism and its settler-colonial legacy. Catholic churches are being burned, possibly as retribution and an expression of Indigenous outrage, possibly by right-wing white power provocateurs, after the ‘revelation’ of unmarked Indigenous childrens’ graves at historical Indian residential schools across the country (see here for information).

Burning places of worship is repugnant. It denies the sacred in people and in places. It dismisses any hope and rebuts reconciliation.

However, anyone can recognize that passionate and righteous anger cannot be dismissed. What is to be done?

As an educator it is essential to speak out. The national media is in a moral panic in the face of the confirmation of unmarked graves by ground penetrating LIDAR (a radar technology that is one of Canada’s claims to high tech accomplishment). However, this news comes as no surprise to residential school survivors, was clear in the documentation of the Truth and Reconciliation Commission (TRC), and was well known to researchers and anyone involved with the residential schools which ran until the 1980s. But many who have encountered these truths found little interest. My paper on the legacy of the residential schools presented at the American Association of Geographers in 2016 was greeted with a collective academic yawn. Perhaps the most successful effort on behalf of Indigenous children has been that of the First Nations Child & Family Caring Society.

What distinguishes our collective outrage today from past reactions? These deaths, these lost childrens’ skeletons, have been found. While a grave is evidence of a past life and death, and a gravestone is a marker which represents (abstractly), an unmarked grave is only a vaguely located lieux de memoire. It is much less tangible. Who and what is buried is harder to grasp. Like a haunted place, it gives up only virtual presences. Even the witness of survivors included in the volumes of the TRC reports is text. But stories and ghostly, haunting, memories are now presented via LIDAR and actual bones as material graves and as childrens’ skeletons. The remembered and thus ‘ideally real’ becomes the actually real and present. It has to be dealt with otherwise we just create more trauma. Visceral, emotional outrage, tears and anger are entirely appropriate to what words have been poor at communicating. “Show don’t tell:” Bodies show, and they tell in their own way. July 1 2021, Canada Day, has inadvertently become a national day of tears and mourning and a sense of shame and unease – even for the most sceptical.

The students’ bodies were interred without markers and sometimes only in shallow graves. These were informal unceremonious burials conducted by Roman Catholic Church officials and employees. Whereas other churches such as Presbyterian Church of Canada have engaged in recognition of historical injury, apologies and lengthy reconciliation processes both directly and through national truth and reconciliation since the 1980s, the Catholic church has been reticent and guarded. They have refused to release records which will make it difficult to identify individual bodies except via DNA matching to relatives.

Since 2019, in conjunction with Paramatta Female Factory Precinct Association, Justine Lloyd and Linda Steele have been working with the help of our publisher Sage Publications to expedite a forthcoming Space and Culture special issue on Sites of Conscience which considers other global sites of trauma and Indigenous genocides. A full history of settler-colonialism would trace European settlers’ and their administrations’ imposition of carceral discipline and hostility to Indigenous people (whose mere presence interfered with the agricultural Europeanization of Canada). It would go beyond a ‘Colonial Matrix’ of capitalism, modernity, imperialism and racism. Many settlers themselves had been dispossessed and brutalized. This traumatized population was ideal fodder dumped into desperate situations of do-or-die settlement on the “frontier.” Families lived in dugout-like earth shelters and were forced to clear land under penalty of being evicted. Many survived thanks only to the generosity of Indigenous neighbours who better understood how to work with, rather than against, the seasons and climate. However, the work of genocidal settlers dispatched by British lords, continued by religious orders that prosecuted a Christianizing mission, coordinated by a nation that revelled in its colonial institutions, has material consequences today.

We must not put these dead children back in the closet like mere skeletons. In their renewed presence, we have to concede that they are ‘us’ and they could be anyone’s child except for the racist contempt of these school systems. Collective, not sectarian, responses are needed. Canada has only just ratified the UN Declaration on the Rights of Indigenous Peoples. The relative silence of politicians, community leaders and other religious groups on both the unmarked graves and burning churches needs to become tangible action today. Material evidence and presence now demands material action. What is to be done? We need to look to and honour both the dead and the living, now.

The Federal government and Justin Trudeau personally must drop its attempts to wear down Indigenous peoples with interminable appeals against the awards granted to them in Canadian Human Rights Commission process.