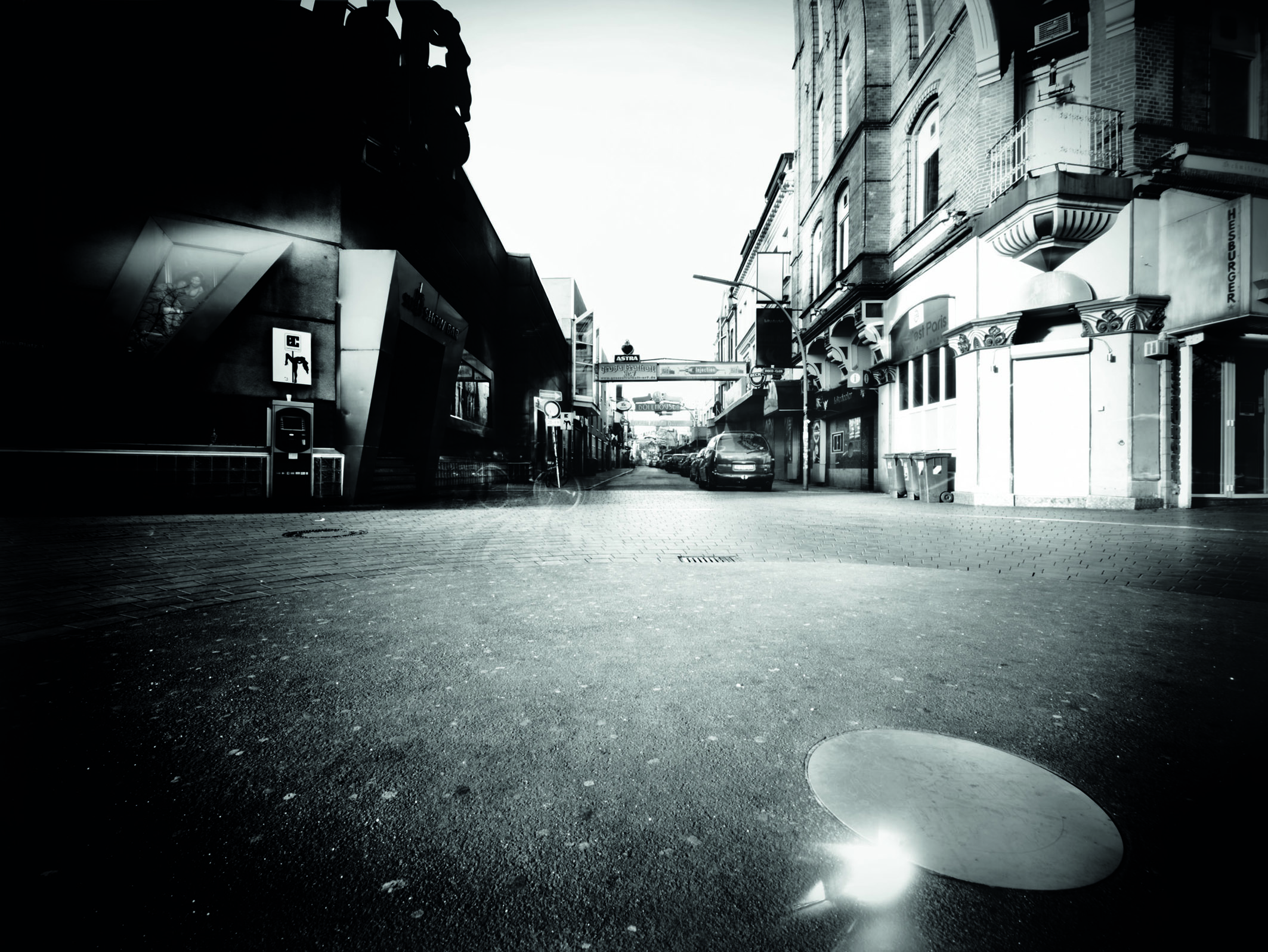 The camera pans down from one of the most famous street signs in all of Hamburg. Große Freiheit  [Great Freedom] is written on it and to this day it stands on the corner of the Beatles Platz [Bealtes Square], which was inaugurated 2008 and is itself reminiscent of the past where the Beatles played their first concerts in this very street.

So of course it’s not the metal silhouettes of the Beatles that we are seeing in the short clip of Jürgen Roland’s St. Pauli-Report but the director himself, explaining the cinematic history of the notorious neighbourhood right next to Hamburg’s harbour. Jürgen Roland was a prolific name in the film and TV landscape in Northern Germany. Up to the aforementioned film he had produced several films and TV shows that were set in the streets of Hamburg and especially the district St. Pauli. With Jürgen Roland’s St. Pauli Report he was basically following a trend in the West-German movie industry of the 1960s and 70s where several of these so called Report-films were made – with Schulmädchen-Report [Schoolgirl Report Part 1] being the most popular. They featured soft-erotic stories and were produced in a pseudo documentary way to give the impression that the depicted events and people are actually real. Jürgen Roland was able to give this film his own twist by appearing as a host himself and telling the stories directly to the viewer.

While he is doing so he is sitting on a self-made throne built from film cans. It’s no coincidence that the first two films he mentions are Große Freiheit Nr. 7 [Great Freedom No. 7], the famous 1944 drama directed by Helmut Käutner and Auf der Reeperbahn nachts um halb eins [On the Reeperbahn at Half-Past Midnight] from 1954 directed by Wolfgang Liebeneiner, both starring Hans Albers (who also has a place named after him not far up the Reeperbahn – the most famous street of Hamburg’s night life and red light-district). These films are famous classics of German cinema and were in my opinion crucial for the depiction of Hamburg in movies.

Hamburg itself had quite a troubled film history up until this point. Even though valid attempts were made to create a movie industry in the harbour city, it never achieved the same reputation and output as other German production sites such as Berlin or Munich. But as film scholar Michael Töteberg writes, Hamburg possessed three locations that the German film industry could not miss out on: its zoo, Hagenbecks Tierpark, the harbour and St. Pauli (Töteberg, 2016). While the zoo was used to create exotic films that were set in places far away, the harbour was used as the setting of adventure films set on ships. St. Pauli, however, as one of the most infamous districts of the city, carries a meaning and reputation of its own that translates into the stories of the films that take place there. This image of a city or a particular district cannot be artificially or arbitrarily created. A city, as Rolf Lindner explains, is a culturally coded place soaked in history and stories that create an imaginary space made of images and texts which transcends the physical space (Lindner, 2008).

As mentioned earlier, Jürgen Roland is probably one of the best-known names to be associated with Hamburg and St. Pauli’s film and television history. Starting in 1953 with Der Polizeibericht meldet… [The Police Reports] – a German version of the American television series Dragnet – his filmography spans over 40 years with more than 25 productions. Between 1958 and 1968 he was responsible for the TV series Stahlnetz [literally, Steel Net] which quickly gained a nationwide following and became a so-called streetsweeper – meaning everybody was at home watching the new episode so the streets were empty. Roland sitting at the point of entry to the Große Freiheit and reminiscing over all the different titles that carry the location St. Pauli in their names is a statement in itself. In doing so, he is linking the physical space with the mediated image created by these films.

The St. Pauli that emerges from these films is a mediated space; a space that might be visited by numerous people every night, but which has nevertheless gained its reputation mainly through depictions of certain characters in motion pictures. St. Pauli and the Reeperbahn have become heavily mediated spaces because the scenes showing these places have been primarily shot on location with only interior shots of certain bars being recreated in film studios. In doing so, the scenes and the films themselves become identifiable and credible and also interact with preconceived expectations of the audience. The mere stating of a location such as “St. Pauli” in a film’s title evokes a certain premonition in the viewer (Nowell-Smith, 2001).

Roland, however, is also highlighting different themes within the district’s image in his St. Pauli Report. The first is the semi-documentary style that is prevalent in the Report-films of the 1970s, displaying fictitious actions as if they were actually happening. This was also an often used technique by him, for example in his earlier work on Der Polizeibericht meldet… and Polizeirevier Davidswache [Hamburg: City of Vice]. Assuming the dual role of director and host of the film, he breaks the fourth wall and addresses the viewer directly, confronting the audience not only with a narrative but also with his actual persona. His presence is further underlined by the incorporation of his name in the film’s title: Jürgen Roland’s St. Pauli-Report. In doing so the film doesn’t become just another Report-Film set in an arbitrary milieu, but a (seemingly) definitive St. Pauli-film by the expert Jürgen Roland himself. The function of the whole scene is not only to establish the setting of St. Pauli, it also seeks to introduce the director, writer and narrator as a specialist and – going even further – as a kind of king sitting on a throne of (his own) films.

Another approach can be seen when Roland actively distinguishes his St. Pauli-Report from other works of fiction. He states that he’ll be showing a different St. Pauli than the one the audience is used to from films: he will be showing St. Pauli by day, a St. Pauli, he explains that is ‘sober and unvarnished, sometimes bare and vulgar. Often it has heart and emotions, as strange as it may sound’. We are thereby presented with contradictory images that differ from depictions in other films or commonly mediated images of the city. These contrasts are further articulated by the transition to the first actual scene of the film. Roland turns towards the St. Joseph church at the end of the Große Freiheit with its chiming bells – hidden behind neon signs. In the coming scene we see a bride and groom abruptly exit the church – both of them are performers at a sex theatre. Thus a spatial and symbolic contrast is created through the emphasis of the geographical vicinity of the red light district to a sacred place of worship.

Throughout the movie we meet Roland several times, walking around St. Pauli, talking directly to the viewer and introducing the characters of the short narratives that are about to be presented in the film. The effect of this filmic communication process is analysed in detail in a 2013 essay by urban sociologist Gabriela Christmann, where she discusses the role of what she terms ‘spatial pioneers’ in the communicative reconstructions of space in urban quarters. Christman’s analysis of the role of such urban actors, although based on a case study of Berlin-Moabit during the period 2008-2010, also describes a process that is at hand in this scene. Christmann conceptualises such quarters as urban spaces that are often dilapidated, but serve a certain appeal to spatial pioneers who play the role of urban entrepreneurs inhabiting and working in those spaces, especially in the creative industries (Christmann, 2013). Jürgen Roland can certainly be seen as one of those pioneers, since he was born and raised in Hamburg and dedicated most of his career to producing media content in and about the city. Working as a journalist for the Nordwestdeutscher Rundfunk (NWDR) [Northwest German Broadcasting] early in his career – especially as a police rounds reporter in Hamburg– he was very well acquainted with the milieu in St. Pauli and the Kiez (a colloquial term used for the night life district), thus acquiring the experience which became the foundation of his work.

Christmann observes that the challenge of finding something beautiful, or at least interesting, in these run-down urban spaces creates a certain fascination that these

pioneers of space find hard to resist: Many of them take on this challenge by attempting to present such quarters in a manner that neither validates any negative prejudices nor reinforces obvious stereotypes.

Roland does not try to romanticize the St. Pauli area, but certainly contributes to a common narrative thread that is associated with this mediated space i.e. stories about the night life, gangsters, prostitution, crime, police etc. Still, his depictions – although sometimes a bit sensationalized – remain embedded in a realism that he as a Hamburg-native and active documentarist of St. Pauli got to know in decades of work in the quarter and with its inhabitants. As he played an essential part in Hamburg’s mediation after World War II, it is only right for a prolific filmmaker such as Jürgen Roland to claim his throne of film cans right in the centre of the place that he had helped to shape with his own movies.

Hermann Breitenborn is a film- and media historian. His key-subjects are Black cinema, New German cinema, new retro aesthetics, paracinema and cities in film. He is currently doing a PhD on the representation of Hamburg in films with a special focus on the works of Jürgen Roland and Rolf Olsen.