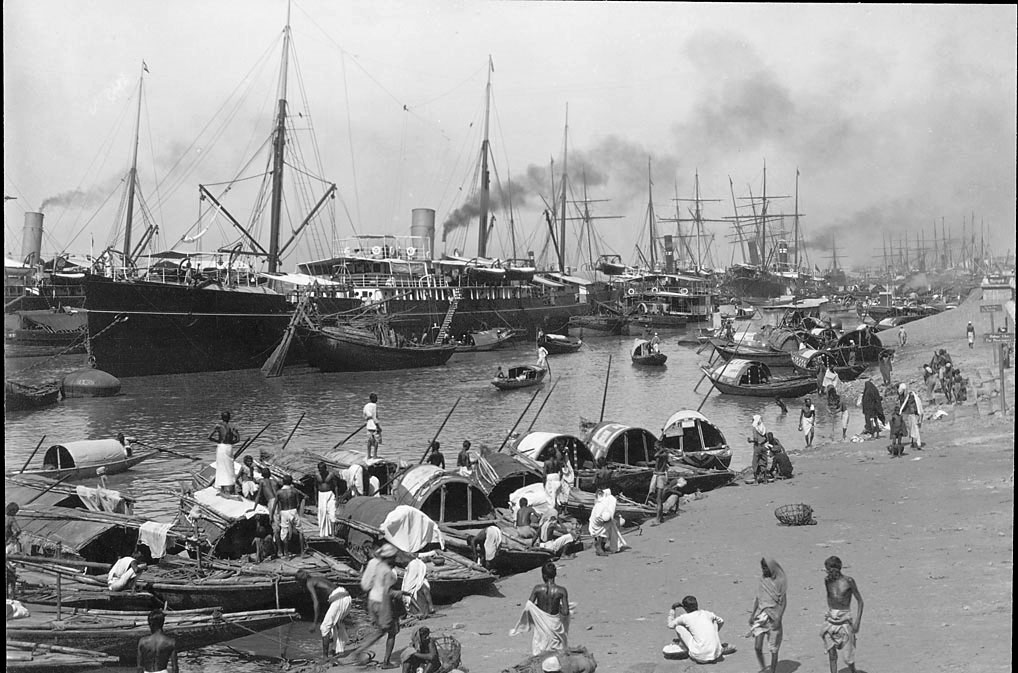 In Memoriam the Victims of the Beirut Port explosion. August 4 2020.

Logistical Worlds No. 2 Kolkata is a small gem. It provides a series of brief, compelling illustrated essays on the political economy of labour and logistics at Kolkata’s ports. These illustrate the operation of contemporary ‘Variegated Capitalism’ (see Peck and Theodore 2007) in which the old and traditional economic forms coexist and support new economic forms and the latest technologies. Variegated Capitalism is the deliberate implementation of Neoliberal priorities such as openness of trade and capital flows, state restructuring etc through local conditions and conjunctures that results is a differentiated landscape of global neoliberalization.

Variegated Capitalism involves “systemically produced geoinstitutional differentiation, at the heart of a reformulated conception of neoliberalization”

Kolkata, Calcutta, has been a key site of colonial trade and imperial control over India from the time of the British Raj starting around 1765. The port of Kolkata has continued as a geopolitical centre of global logistics that began with the creation of warehouses as a colonial architectural form of entrepots for transhipments of tea on Kolkata’s Strand Bank. The studies include Kolkata’s related ports of Kidderpore, Haldia, Sagar and Siliguri on the Hooghly River.

The papers are well illustrated and their polemical comments about what the researchers observe is balanced with a Glossary of key concepts translated in English and Hindi []. While the essays are often too brief to properly explain their points they offer a deep dive into the complexities of containerized ports, the persistence of loading and unloading by informal, manual labour, the politics of regional development including China’s ‘One Belt One Road’ projects (specifically in terms of the BCIM Corridor, connections from Kunming to the Indian Ocean) and relations to other ports and standards such as the Panamax shipping standard for ships that can traverse the Panama Canal fully loaded.

Logistical space is part of the global space of flows (Uribe 2019) but relatively untheorized. It has never been public space, but resides in and between public and private facilities such as ports, canal, docks, ships and warehouses.

Logistical Worlds No. 2 follows on a similar text on the Chinese multinational firm Cosco’s conscession in Piraeus, near Athens, Greece. This text offers a model for a team of researchers exploring different aspects of a complex cases of logistical and economic infrastructure. The approaches used by the contributors attend to the historical development of Kolkata and India, such as Kaustubh Mani Sengupta’s chapter on the Victorian expansion of the port. They combine attention to the ways logistics produces space and time according the imperatives of capital and connection at the disjunction between software economies (from global electronics parts production, to digital tracking of shipments, to electronic trading of commodity futures), material infrastructure (e.g. docks, cranes, dredges, warehouses) and hard labour (e.g. contract mechanized work and manual day labourers). Brett Neilson and Ned Rossiter link technics and materials to politics and economics. After the historical outline of the creation of the docks and warehouses, a key chapter by Atig Ghosh focuses on the demand for concrete for new port infrastructure and the air quality and water table impacts of concrete production using sand quarried from local rivers.

A second key point for me is Immanuel Ness and Mithilesh Kumar’s contributions examination of the ‘informality’ of dockworkers’ labour, arguing that this is hardly an anomaly, nor peripheral to the ‘formal’ economy but is standard in much of the Global South and perhaps a new norm for workers in the Global North. Informality in India is a labour economy of 400 million workers engaged through a flexible system of subcontractors, outside of unionized labour that is peripheral to the key activities of the economy. Under the auspices of grandiose national economic plans heralded by strong-man leaders, new infrastructure provides new speculative financial opportunities for global investors who will have realized their gains whether or not the project ever functions. Meanwhile, for firms, new technologies are introduced that operate concurrently with the increased exploitation of contingent labour disciplined by state-dominated unions.

To show this global economic conjuncture in only 112 pages featuring multiple voices, and fit in a detailed translation glossary of key concepts deserves recognition as a formidable achievement. Full colour illustrations and open access copyright transcend the limits of the established publishing industry.

ps. Writing at the shocking moment of the tragic loss of colleagues’ lives and the urbicidal (Stoppani 2012) destruction of a large section of downtown Beirut by over 2000 tonnes of ammonium nitrate fertilizer abandoned in the city’s port, I note the significance of logistical movements as a zone of flexible deregulation. Beirut Port is a touchpoint of the space of global flows that often escapes local controls, standards and surveillance to allow large actors in the economic, military and informal sectors to compensate for disruptions and challenges.

Uribe, Simon (2019). Illegible infrastructures: Road building and the making of state-spaces in the Colombian Amazon. EPD: Society and Space 37(5) 886–904