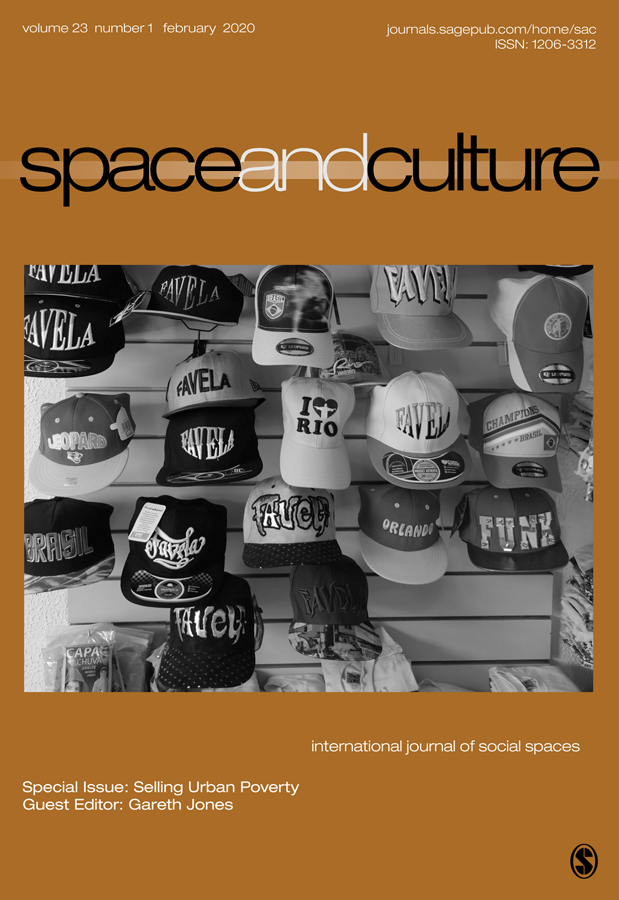 Brokers and Tours: Selling Urban Poverty and Violence in Latin America and the Caribbean

Abstract: This article explores how so-called “slum” tourism commodifies  poverty and violence, transforming urban deprivation into a tourism product. In particular, we pay ethnographic attention to the role of brokers who mediate encounters between residents and tourists. The article explores how brokers—tour guides, art curators and civil society organizations—work to mediate power structures and enact a specific representational-performative politics. In so doing, brokers play a key role in aestheticizing and performing poverty and violence and converting disadvantaged spaces into a tourist product. We argue that brokers are vital to the reproduction of existing inequalities and to the formation of new social relationships and subjectivities.

A Favela That Yields Fruit: Community-Based Tour Guides as Brokers in the Political Economy of Cultural Difference

Abstract: Reversing decades of fear and neglect as no-go zones for outsiders, Rio de Janeiro’s most iconic favela communities have become tourist attractions offering a glimpse of the purported “other side” of Brazilian society as well as panoramic vistas over the Marvelous City. Since 2010, tourism has become a vehicle and justification for security, infrastructure, and capacity-building projects in Rio’s favelas. Promoted as an exemplary favela in this social uplift scheme, Santa Marta has received thousands of tourists per year. In an unprecedented step, Santa Marta guides organized themselves into a committee to collectively manage the tourism enterprise and to promote themselves as a brand of community-based tourism in contradistinction to outside commercial tour operators. Their authority and authenticity as local experts hinge on the emergent perception of the favela itself as a resource and that their labor makes that value economically productive. This article analyzes the work of these guides as cultural brokers to think through the semiotically overdetermined yet shifting status of the favela as space of cultural alterity from the perspective of those who are both targets and agents of its transformation. Exploring how community-based guides have emerged as political and economic brokers, this article suggests that their performances as local experts, as well as their modes of organizing, shape tensions and contradictions of the favela as a commodified place. It demonstrates how collectivist and competitive interests among guides embody differing perspectives on state intervention in their community. The discussions and conflicts among tour guides themselves embody the tensions over the future of communities long marginalized by state and capital yet suddenly targeted for economic investment and cultural valorization.

The Role of NGOs in Touristic Securitization: The Case of La Antigua Guatemala

On a Walking Tour to No Man’s Land: Brokering and Shifting Narratives of Violence in Trench Town, Jamaica

Abstract: Tourists who visit Trench Town are drawn in by the neighborhood’s rich musical heritage. They want to see the birthplace of reggae and witness the circumstances depicted in many famous Jamaican songs. Knowingly venturing into marginalized territory, into the “ghetto,” travelers expect to encounter spectacular forms of violence. Yet what the walking tour of Trench Town reveals is an experience of another kind, an excursion that exposes poverty as structural violence, and that points to the historical and political struggles that are constitutive of the area’s social fabric. In this article, drawing on an ethnographic vignette of a walking tour that starts in Bob Marley’s rehearsal grounds and ends by an empty plot locally known as “No Man’s Land,” I focus on the entanglements of violence and tourism and present the discrepancy that exists between touristic desires and the reality of the tourism commodity. This analysis reveals how residents of Trench Town simultaneously choose to address and disregard different (un)spectacular forms of violence during the tourism encounter and I argue that in so doing, local tour guides productively leverage violence to denounce and grapple with structural and historical brutalities.

Notes on How to Irritate a Group of Committed Artists: Politics of Emotions at the Ghetto Biennale in Port-au-Prince

Abstract: The Ghetto Biennale was founded in 2009 by British photographer, filmmaker, and curator Leah Gordon in collaboration with members of the Haitian artist group Atis Rezistans. The biennale is rooted in considerations around contemporary art as a place of klas privilege and social exclusion. The organizers took on the complicated task of bringing together artists from different socioeconomic strata in a short-time residency project in an informal neighborhood. Many of the visiting artists produce art that can be described as a socially engaged artistic praxis. By analyzing the Ghetto Biennale as a curated social situation that produces artistic poverty tourism, I discuss the varied hierarchical inter-klas relationships between the participating visiting and local Haitian artists. These relationships are often informed, I argue, by the politics of pity and a competitive sentiment of touristic shame that produces in return critical suspicion and a spiral of moral accusation within the visiting artistic milieu: Who collaborates most sincerely and decently with inhabitants of a neighborhood living in abject poverty? The visiting artists try to escape this spiral by self-censoring all potential self-interests in their praxes through a renunciation of authority and authorship and by declaratively presenting their projects as altruistic spaces of community empowerment that give a voice to “subaltern” artists. The members of Atis Rezistans in this narrative are seen to be constantly at risk of further marginalization by powerful actors from higher socioeconomic strata. But they actively deploy their own agency by negotiating these politics of pity for their own socioeconomic benefits.