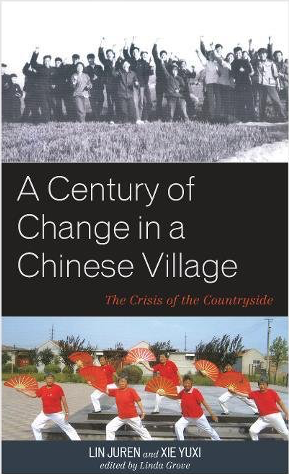 A Century of Change in a Chinese Village: The Crisis of the Countryside

This book tells the story of the village of Lengshuigou (冷水沟or Cold Water Ditch), located on just south of the Yellow River near the suburbs of Jinan, the capital city of Shandong Province. It describes the social transformations within Lengshuigou from approximately 1940-2010, from family structures to social networks, rituals to politics, work and economy. This analysis represents the latest scholarly work that forms part of the existing canon of research on one of the most studied villages in rural China.

Three prominent American scholars—Ramon Myers, Philip Huang, and Prasenjit Duara—studied Lengshuigou, among other villages, to create the foundational research and theory for the study of Chinese villages, inaugurating the field known as Rural China Studies. Unlike its predecessors, this story was written by the Chinese as part of a collective research effort involving numerous undergraduate and graduate students from Shandong University, led by professor Lin Juren of the Department of Sociology. Professor Mark Selden (Cornell University) and Professor Linda Grove (Sophia University), two prolific analysts of rural Chinese society, arranged for the book’s publication in English and edited the final manuscript respectively.

A Century of Change in a Chinese Village: The Crisis of the Countrysidebuilds on the tradition of “follow up studies” initiated in China by the anthropologist and sociologist Fei Xiaotong in the 1930s. Lin and Xie’s method was to return to previous research and sites to re-examine and update records from earlier studies from the same distinctive perspective. This approach generates a comprehensive and extensive collection of material about the topic, which facilitates effective and consistent comparisons. As the fourth generation of contribution to consistent follow-up research in Lengshuigou, A Century of Change in a Chinese Village explores four waves of studies conducted in the 1980s, 1990s and early 2000s, based on 351 pages of verbatim interviews conducted by Japanese researchers between November 1940 and August 1944 as part of the Kankō Chōsa surveys in Lengshuigou.

Follow up studies tend to foster close connections between researchers and participants, facilitating in-depth inquiries and the extensive exploration of recurrent topics from numerous perspectives. In Chinese rural societies, these close connections are extremely valuable. As Grove writes in the preface (xvi), the networks established between Shandong University and the people of Lengshuigou allowed Lin and his team to conduct a large-scale survey of 540 villagers, from 1,143 households. They examined factors such as the value and maintenance of interpersonal relationships and networks. Lin and Xie’s survey, the most revealing and relevant aspect of this follow up, provides the basis for the analysis in chapter six, and demonstrates that the villagers in Lengshuigou have become increasingly open to new relationships, including affective relationships, with people outside their kinship and lineage networks. This has been confirmed in other studies, such as in Andrew B. Kipnis’ latest book on Zouping published in 2016. Lengshuigou villagers are also getting increasingly instrumental or “rational” (201) about these relationships and their maintenance requirements. A major downside to all this social transformation is “a crisis in social trust” (199), as the authors describe it, from the increasing diversity of foreign ideas that have brought insecurity to long-standing relationships and social networks, historically based on blood relations (xueyuan) and regionalisms (diyuan). These are still regarded as the most important, (199) but are no longer the imperatives they once were. Lin and Xie’s findings represent a major departure from Fei Xiaotong’s descriptions of village life in China as parochial, isolated, restricted by social circle and fueled by familiarity (Fei, 1992). As such, the authors argue that the current diversity that marks the formation and composition of social relationships and networks is directly correlated with changes in village occupational structure and landscape.

For example, the percentage of villagers relying on agriculture for subsistence has dropped from approximately 90 percent in the early 1980s, to 28 percent in the late 1980s (218). In modern Lengshuigou, every household now has a non-agricultural source of income. The attitude towards farming has also changed drastically: about 60 percent of the villagers consider agricultural work to be “unprofitable.” Nonetheless, they still view farming as a social and cultural touchstone (226). With the increasing infiltration of Lengshuighou into Jinan city through urban development and infrastructure in Lengshuigou and surrounding areas, many villagers now travel or commute daily to Jinan by vehicle or transit for work or school, creating new kinds of social interactions, changing mindsets and social practices. For the youth of Lengshuigou, these changes represent hope for new opportunities, including more autonomy and freedom. For the older generations, the changes represent the end of an era and the imposition of a new and alien lifestyle.

As is typical of a follow-up study, this book draws on both quantitative and qualitative methods; from previous scholarly analyses to documentary information (county gazetteers, archival material, and family documents); policy documents, survey data, in-depth interviews and participant observation. The book is divided into eight chapters in addition to the introduction and conclusion; each chapter discusses a specific aspect of life in Lengshuigou: historical origins, politics, family lineages and relationships; social stratification, relationships and network structures; local economy and labour and the emerging future of the village itself.

Relying on a diachronic strategy, the authors covered each topic under four periods: the early years, (1900-1949); the state-planned economy period (1949-1977); the first wave of economic reforms, including the dissolution of the communes and the development of village enterprises (1978-mid-1990s) and the expansion of those reforms in the late 1990s-2010s. This last period refers to when the villagers began to adopt new lifestyles and rely on non-agricultural forms of income. The authors’ strategy may be somewhat overstated, but it allowed them to explore each topic in a comprehensive, structured and didactic format.  That and the fact that each chapter stands alone in quality and depth make this book an excellent resource as a textbook for the study of life in contemporary Chinese society.

A Century of Change in a Chinese Village: The Crisis of the Countryside will also the last of its kind. Since 2015, Lengshuigou is being slowly demolished to make space for a bullet train station and other massive urban structures, such as mass transportation projects, residential towers, schools, hospitals, and commercial complexes. Consistent with similar changes in numerous other Chinese villages, the eventual disappearance of Lengshuigou as a stand-alone rural community represents a metamorphosis and crisis of sorts for all rural people and the sociologists who have studied them. For researchers who specialize in the study of rural Chinese communities, Lengshuigou represents an imperative and an obligation to review the methods, topics and examinations in this rapidly changing field of study.

Fei, Xiaotong. 1992. From the Soil: The Foundations of Chinese Society. Berkeley: University of California Press.

Kipnis, Andrew B. 2016. From village to city: social transformation in a Chinese county seat.Oakland: University of California Press.