The Question of Space: Interrogating the Spatial Turn between Disciplines
Edited by Marijn Nieuwenhuis and David Crouch
Part of the series Place, Memory, Affect
Rowman and Littlefield: 2017 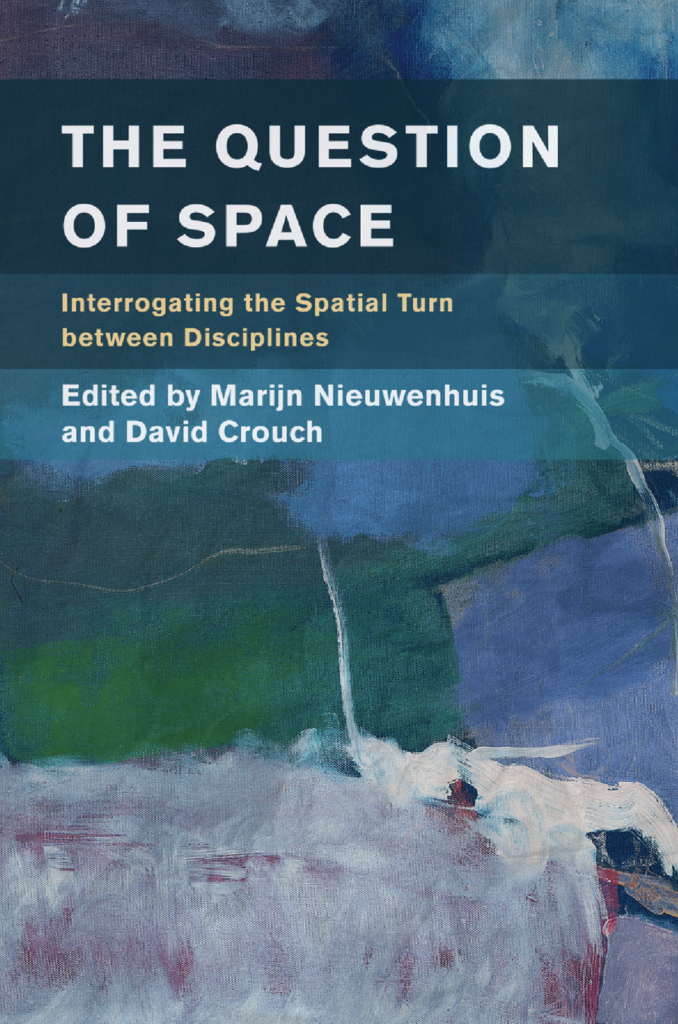 The book, ‘Question of Space’ is a refreshing inquiry into the spatial turn that goes beyond disciplinary boundary. The editors have introduced the book through a prelude rather than a conventional introduction and ended it with a postlude. The use of a prelude and postlude is to establish the playful and fluid nature of ten innovative book chapters written by authors coming from different disciplinary backgrounds. Started off as an accidental book project, the book disrupts the hierarchies of knowledge, and disciplinary enshrinement regarding the subject nature of space. The book unravels the ‘different ways of ‘knowing’ space’ (P: X) and teases out, how spatial thinking, which is often implicit in our practice, process, and writing, is already embedded in our understanding of worlding. Influenced by French thinkers, they envisage ‘space as a practice (‘spacing’)rather than a noun (‘space’)’ (P: XI). Here, space is conceptualized as relational and subjective (following Massey, 2005, 1993). It is also expressed through difference (following Derrida, 2004: 337)and as folds (following Deleuze and Guattari in Doel, 1996: 436).

The prelude acts as a short introductory text for any beginners, new to spatial thought. Here the evolution of spatial thinking in Human Geography as well as in Anthropology, Sociology, Dance and Performance Studies are concisely elucidated. Readers can see the trajectory of spatial thought from Walter Christaller’ Central Place theory in 1933 where space was measured in positivist terms, through law and distance from centre, to its recent manifestation in literary geographies. The milestones of this journey are demonstrated by David Harvey’s Marxist understanding of inequality and justice in city-space, to Humanistic school of thought’s spatial understanding based on the philosophy of existentialism and phenomenology. It also addresses Foucault’s theorization of everyday spaces of power and Lefebvre’s representational spaces. Thrift’s non-representational spaces focusing affective and performative spaces are also eloquently explained in relation to space and geography.

However, the inclusion of creative geographies, where space is innovatively reinvigorated, and feminist geographies, which challenges the hierarchies of spaces through the tropes of violence, safety, and access would have added another rich and essential layer to the analysis. Although the authors give a cursory glance at Haraway’s (1988)work, this is missing from the introduction.

The editors have given particular attention to Tim Ingold and Edward Casey’s scholarly work in anthropology, Sociologist John Urry’s work regarding the nuanced nature of Place and Space debate, and Ian Sinclair’s work involving memory, mapping, and language. New entanglement of humanities and space is also touched upon through the new journal of Geohumanities and Literary Geographies. In these discussions, the editors give reference how individual research chapters in the book have been influenced, referred, challenged, and in some cases reinvented these theoretical strands.

The first chapter by David Crouch takes an unusual combination of allotment garden and painting, to challenge the elitist nature of landscape studies. In a community allotment garden, space is intimately performed and experienced through multiple practices, affectivities, meanings, and values. In this chapter, artist Peter Lanyon’s work shows how human and non-human affective atmosphere commingles through memory and space making. He borrows from the theoretical canon of Deleuze and Guattari and Massey to explain this fairly complex occurrence of space, which is relational, multiple, abstract, political, embodied, and many more.

The second chapter by Awelani Moyo shows a unique blend of theoretically rich and ethnographically sound analysis of landscape both in and as performance. Through a study of Cape Town’s Infecting the City(ITC) festival in 2009, and through a homeless coloured woman’s transgressive figure, she has dealt with difficult questions of identity, belonging, citizenship, and mapping the cityscape. She merges Lefebvre’s concept of lived and conceived spaces with Tim Ingold’s work on landscape and dwelling to establish geography as an epistemic category which makes the public space inclusionary/ exclusionary.

George Revil’s chapter on sonic spatiality touches a rarely explored area of theorizing spatiality of voice/sound in social and cultural theory. He draws in materials from scholars working in interdisciplinary sound studies to argue for a mediated, embodied, and experiential understanding of space. He mentions how phenomenological approach by anthropologist and media theorist Carpenter and McLuhan in recognizing materiality of acoustic spaces can be influential. The work of Deleuze, Serres, Nancy, and Lefebvre in spatializing properties of sound and rhythm, Bor and LaBelle’s formulation on sonic mediation made the field of ‘vocalic space’ dynamic and imaginative.

Zivkovic’s chapter on the work of feminist and literary scholar bell hooks, as an affective spatial thinker, powerfully addresses the prelude’s lack of attention towards gender and space. She rightly points out that, for the majority of books on space, gender comes as an ‘afterthought or add-on’ (P: 63). Hook’s scathing critique of white feminist theorization, infused with her censure for imperialist capitalism, draws intimate and personal evocations around space. Her writing, much like taking a memory walk in her hometown of rural southern United States, unpacks the politics of location, aesthetics, belonging, and home in a nuanced way. The essay draws attention to Virginia Woolf and Sarah Ahmed, in relation to hook’s writing, which exemplifies a passionate and subjective politics. These works challenge boundaries, ask questions about spatial ownership, and retheorize ‘look’ and ‘wonder’ as methodological praxis.

Ghraowi’s chapter deftly deals with the subject of trauma, memory, and space through a literary reading of Palestinian author Ghassan Kanafani’s novella ‘Returning to Haifa’. He brings together Freudian psychoanalysis, Bachelard’s poetics of space, Lefebvre’s lived space and rhythmanalysis to express the hypocrisy in humanitarian aid, use of testimony to justify psychiatric victim analysis, eradication of Palestinian subjecthood, and the blurring of past and present in the war-ridden city. The protagonist’s narrative experience, which binds these threads together, at times seems too ambitious but does shed light on these difficult conceptual terrains.

Watanabe’s chapter challenging the western epistemological idea of space and place makes the book truly attentive to the decolonization of knowledge. It is stimulating to see a completely inverted theorization of place by Japanese philosopher Nishida, as ‘nothingness, boundless and therefore universal and encompassing all spaces’ (P: 97). In the dominant academic norm where Western continental thinkers produce theory, and Eastern thought is noted as insignificant ‘experience’, ‘anomaly’ or ‘aberration’, Nisida’s ontology of becoming, barring its allegiance towards Japanese aggression on other Asian countries during the Second World War, requires serious attention from western scholars.

The chapter by Nieuwenhuis takes up the concept of territory in the discipline of International Relations. He questions how we have rationalized black lines on white paper as territories. The chapter grapples with the material basis of territory in relation to the formulation of State, its judiciary, and governance. He asserts, how our ‘cartographic gaze’ has established a connection between line, territory, and State saying ‘without lines there is no territory and without territory there can be no state’ (P: 119). But what happens when we think about territory beyond its horizontal spread but more in terms of its verticality? Can we envisage a relationship which is more ‘abstract, conceptual and ideal’ (P: 119)?

Belibou’s chapter on the materiality of internet cartography and emergence of a twinned reality or ’hyperreal’ nature of virtual, is a very timely piece during the moment of Geography’s digital turn. He tries to map internet through Google maps, as well as the through ‘darknet’, with its most popular browser The Onion Router. The chapter in its succinct way of writing highlights the reconfiguration of the conceptual domain of space and place in creating ‘neogeography’ with theoretical insights from Casey and Malpas.

Conway ventures to illustrate a quite familiar topic in geography, the relationality of space through the motif of films. His illustrious yet illusive writing style with short sections of philosophical underpinning gives spatial thought a textual reflexion.

The last chapter of the book breaks all conventional writing style where Earth exercises her Geo Agency and speaks directly to the geographers through a letter. Author Martin Gren takes the reader through geographies different historical traditions to remind the discipline to be more responsible in the era of Anthropocene.

Overall, the book effectively ushers towards an ontology of space, where space is a discipline in its own right. The way it brings together spatial thought in social sciences and humanities, it calls for a post-disciplinary perspective. It is a compelling read, gives voice to diverse writing styles, thematic genres, and analytical lenses that bring space fully into our epistemology.