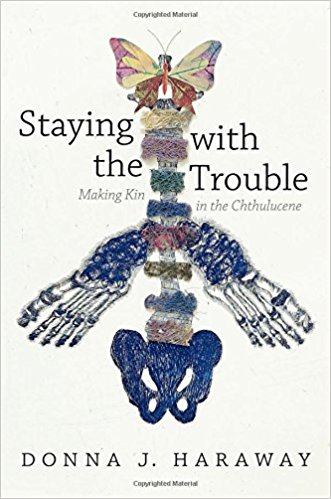 Staying with the Trouble compiles Donna Haraway’s latest thoughts.  In the book, Haraway calls for the need to reflect and think on the possibilities for facing the era post-Anthropocene, the era of, what she calls, the Chthulucene. The book is divided in eight chapters that can be presented in three parts: the first 4 chapters of the book are mainly ‘theoretical’ and serve to conceptualize String Figures-SF, Tentacular Thinking, Sympoiesis and the Chthulucene; the second part (Chapters 5, 6, and 7) provides practical examples of becoming-with other species and elements to show how the Chthulucene can shape and transform our human ways to relate with other species and the planet (Terrapolis in the Chthulucene); the last part builds on science fiction (Speculative Fabulation-SF) and storytelling as a way to present the forms the Chthulucene may have (Proctor, 2017). Response-abilities is one of the main and most important elements of the book alongside with String Figures-SF, Becoming-with, Tentacular Thinking and Sympoiesis; these concepts are explored in this review.

I am not particularly engaged in Haraway’s work. However, in this book, I observe how the author engages with Northern aboriginal perspectives, Feminist theory, Biology, Ecology, and Postmodern theory. I found intriguing the way the Nomad is presented in the process of becoming, that for Haraway is always becoming with other species. The book has the merit of exercising imagination and for bringing some Northern Aboriginal wisdom to thinking the post-Anthropocene.

For Haraway, the Chthulucene is an era (with no time nor history) in which human race will confront its arrogance and ‘superiority’ and humbly make kin with the biological critters coming from the under-ground. The Chthulucene is the era in which humans will make kin with tentacles, spiders, bacteria, different ways of perceiving, living and dying, and becoming-with in n-dimensional time-spaces.

I observe that some concepts of the Chthulucene, especially its n-dimensional time-spaces and becoming-with, are inspired in Deleuze and Guattari’s concept of becoming. In her conceptualization of the Chthulucene, Haraway forgets Deleuze’s exploration of the Tick in Difference and Repetition to deconstruct and dissolve the static and unity of the self, to open up the possibilities of becoming. The Tick relies on different structures outside of itself, at the organic level, to perceive the world (Posteraro, 2016). The idea of the Tick is explored by Deleuze inspired by the work of von Uexhüll. Von Uexhüll suggests that each living cell perceives and acts but also “has perceptual or receptor signs (Merkzeichen) and impulses or effector signs (Wirkzeicheri) which are specific to it” (von Uexhüll, 1934, pp. 322-323). From this idea, von Uexhüll (1934) argues that “perceptual and effector worlds together form a closed unit, the Umwelt” (p. 320).

What is really important in von Uexhüll’s work for this book review is the acknowledgement of n-dimensional time-spaces of the Umwelt. This category is relevant in Haraway’s book but not well developed. The recognition of n-dimensional perceptual spatio-temporalities in each “soup bubbles (perceptual and effectors living cells) which intersect each other smoothly, because they are built up of subjective perceptual signs” (von Uexhüll, 1934, p. 339), plus the way in which time regards a succession of moments by different subjects are key elements of the Umwelt. This is indeed related to the entanglements of species and the actual existence of n-dimensional time-spaces that Haraway suggests for the futuristic Chthulucene.

One of the most interesting features of Staying with the trouble is the String Figures-SF. SF are productive concepts that enclose action, fabulation and potentialities of entanglements. SF are inspired and shaped by different sources: from Navajo’s string figures plays and Hózhó (order, harmonic and right relations of Human and NonHuman), to Storytellings, to Science Fiction, to Speculative Fabulation and Thinking, and to scientific facts. The metaphor of the SF is linked to the idea of ongoingness and to the possibility of collective practices of thinking, making and copulating. The entanglements created by becoming-with multiple species aim for the flourishing and the rise of Response-abilities of the multiple entangled species.

Tentacular thinking suggests the breaking of the binary through bodily practices and networks composed by trajectories, patternings and lines. The tentacular tangles the string(s) to collectively think and make kin with unknowns in storytellings that have been told and yet to come.

Sympoiesis are contact zones in the ongoing Chthulucene. The sympoietic is contrasted with the autopoietic in the sense that the former relates to the making of each other in the collective entanglement, they are

“complex, dynamic, responsive, situated, historical systems. It is a word for worlding-with, in company […] collectively-producing systems that do not have self-defined spatial or temporal boundaries. Information and control are distributed among components. The systems are evolutionary and have the potential for surprising change” (Haraway, 2016, pp. 58-61).

By contrast autopoietic refers to self-organizing individual units (Haraway, 2016). All of these concepts/elements are built around a material semiotics, practices of worlding and sensible materialism that Haraway vaguely explored from the work of Viveiros de Castro on Animism as “the only sensible version of materialism” (Haraway, 2016, p. 88).

Material semiotics is characterized by its “openness, uncertainty, revisability, and diversity” (Law, 2009, p. 142). Haraway (2004) highlights the role that objects (Human and NonHuman) have in the production of meaning and knowledge. The interaction of Human and NonHuman as material-semiotics actors mediates the delegation of functions and purposes, and reinforces the inexistent precondition of meaning of the objects; material-semiotics is “about mutual and usually unequal structuring, about taking risks, about delegating competences” (Haraway, 2004, p. 68).

In Staying with the Trouble, Haraway recognizes Southern Aboriginal and Academic approaches; although they are mentioned in the book, Haraway did not profoundly engage these approaches. She is aware that part of the ideas expressed in her book can be found in other geographies that “thinking about these matters from the ‘global South’ can help undo some of the arrogance of the ‘global North’. And then I remember too that this problematic ‘North’ is the ‘South’ for the decolonial struggles of humans and nonhumans of the indigenous circumpolar North” (Haraway, 2016, p. xiii).

In my opinion, besides the existence of innovative ideas such as String Figures and Sympoiesis, the lack of real engagment in southern approaches places the work in a fictional sphere instead of recognizing the material intermingling characteristics of aboriginal communities and the NonHuman.

There might be some elements to take into account from a southern perspective and, of course, some examples of how SF, Tentacular Thinking and becoming-with can be self-destructive of life itself. Paradoxically, the recognition and awareness that this set of ideas can have experiential and material grasp does not allow Haraway to take a closer look to them, and instead, SF and storytelling are portrayed in a fictional sense to exemplify the look of the Chthulucene.  This suggests broader separations between the South and the North, which she supposedly attacks.

Throughout the text Haraway highlights her com-posting approach (compost pile) instead of a posthumanistic approach. Her general critique is that the post-human is still centred in the Anthropos and leaves behind other spatiotemporal agencies. However, I found that this critique is not well-stated and there are just a few references regarding the uncertainties and non-fixed practices of matter.

The misrecognition of other ways of becoming-with deserves critique. There are aboriginal communities in the global South that approach their relations with the NonHuman in a different way from dominant North American culture. For instance, the life experience of the U’wa community can be portrayed as both: a southern approach and an entanglement of Humans and NonHumans, in terms of materiality and virtuality.  The U’wa are an aboriginal community of about 5000 people that live in the Andes. According to their belief, we live in the world between the upper and  the lower worlds; each world has different expressions or influences on the middle world (the Humans’ world) through nature (Benson, n.d.). For them, petroleum represents the blood of Mother Earth. This is why, when the Colombian government conceded permission to Occidental Petroleum (Oxy) and Shell company to exploiting petroleum reserves in 1995, the U’wa threated to commit mass suicide:

“the U’wa insist upon recognition of their belief that oil was distributed throughout this world and the lower world by the deities when they created the universe, that it is a living resource as if it were the blood of Mother Earth doing its sacred work just where it is, and that to exploit it would be a sacrilege destroying the balance of the universe and provoking the collapse of U’wa culture” (Benson, n.d., p. 1670).

This example illustrates the existing entanglements of Human and NonHuman (we all know the ecological and environmental implications of petroleum exploitation) and the material and virtual relations in some parts of the global South. Haraway recognizes the Chthulucene as an era for reconsidering life and death.  There is also the need to recognize the possibility for the self-extinction of species in the awareness of their entanglements.

Haraway, D. (2004). The Promises of Monsters: A Regenerative Politics for Inappropriate/d Others. In Haraway, D. The Haraway Reader (63-125). New York: Routledge.

Hill, D. (2014, June 27). Will the U’was be forced to threaten to commit mass suicide again? The Guardian. Retrieved from: https://www.theguardian.com/environment/andes-to-the-amazon/2014/jun/17/will-uwas-forced-threaten-commit-mass-suicide-again