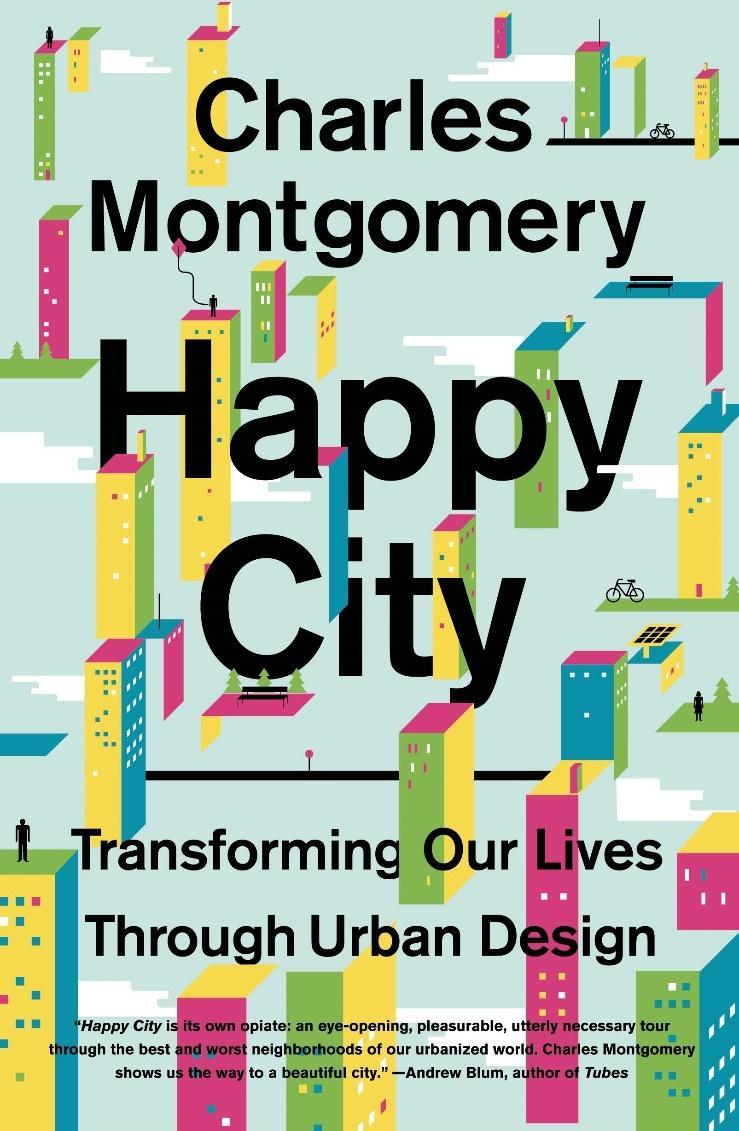 Happy City, written by Vancouver-born Charles Montgomery, opens up an accessible and highly informative discussion on the connection between urban design and human wellbeing. Montgomery argues that cities have always been intended to be tools of happiness, but that we have designed our way into cities that are, in reality, dysfunctional: people are more isolated, unhealthy, poor, and dissatisfied because of these design choices. There are feasible ways, however, that cities all around the world are “saving” themselves by tackling sprawl, incorporating biophilic design, revitalizing dead urban centres, paving the way for automobile alternatives, and doing density well.

Sprawl, as Montgomery shows through myriad examples, is detrimental to the goal of happiness. Indeed, sprawl tends to have the most widespread (pardon the pun) impacts on human wellbeing of any design issue, particularly because it causes long commutes, often in traffic. This causes high stress, contributes to a sedentary lifestyle, and takes away time from building social bonds, all of which worsens health and decreases community-building with neighbours. This, in turn, contributes to decreased satisfaction. Montgomery explains that the simplest way to predict life satisfaction is to ask someone how likely they think it would be that they would get their wallet back if they dropped it somewhere in their neighbourhood. He demonstrates that trust between neighbours is a prediction of overall happiness: we should build cities that build community. This kind of trust is built most successfully when we get density right. The way that people share common spaces and interact with their neighbours in their flow through spaces is an important consideration. When it comes to density, “more” is not always more, but “less” is definitely not more. Townhouses and low-rise apartment buildings tend to have the greatest success at balance. Edmonton does this poorly – I wonder, could we ever achieve a better balance?

Montgomery’s vision is inspiring. There are, however, several obstacles to his vision, which he mentions but does not address. The first is that happiness from increases in external sources (e.g., having a bigger, nicer home) tends to plateau over time. Ultimately, our satisfaction returns to a baseline. There is enough research to prove that urban design which promotes active lifestyles, shorter commutes, and connection to nature and one another greatly improves physical and mental wellbeing. However, having these design features as an end goal is liable to fail, since we seem to be hardwired to the constant pursuit of more and better. This poses a risk to wellness-focused urban design, as the pendulum may swing as we reimagine our urban ideals and are ever in pursuit of greener, private pastures.

The second feasibility challenge is the sheer vision and power that it would take to implement the sweeping changes that will achieve the “happy city.” He cites Bogotá, a place where the mayor has more unilateral authority than we could imagine in most North American cities, as an example of urban design that focuses on equality of public space: fantastic, sweeping changes were made within the span of two three-year mayoral terms. Similarly advantageous, Copenhagen benefits from a deep sense of pride and culture around bicycling which has enabled widespread acceptance of disruption to a dependence on automobility. To disrupt path dependency on any aspect of our urban life requires, I would argue, either a dose of authoritarian power, or else a strong cultural foundation or movement towards urban change in a specific direction – or both.

These challenges are the excuses of many naysayers, but Montgomery, though not addressing them head on, calls us to reconsider the impact we can have by simply deciding to create and demand change. In the final chapters, Montgomery invokes the work of Henri Lefebvre for a reminder of who rightfully owns and shapes the city: les citadins, we who live and participate in cities. He says, “[The right to the city] is not something that can be bequeathed by the state… It is earned through the act of habitation… you have a natural right to participate in shaping [the city’s] future” (295). Understanding this truth, inspired by his many examples of citizens who have made their cities even just a little bit happier, the reader cannot help but believe that they can do the same.