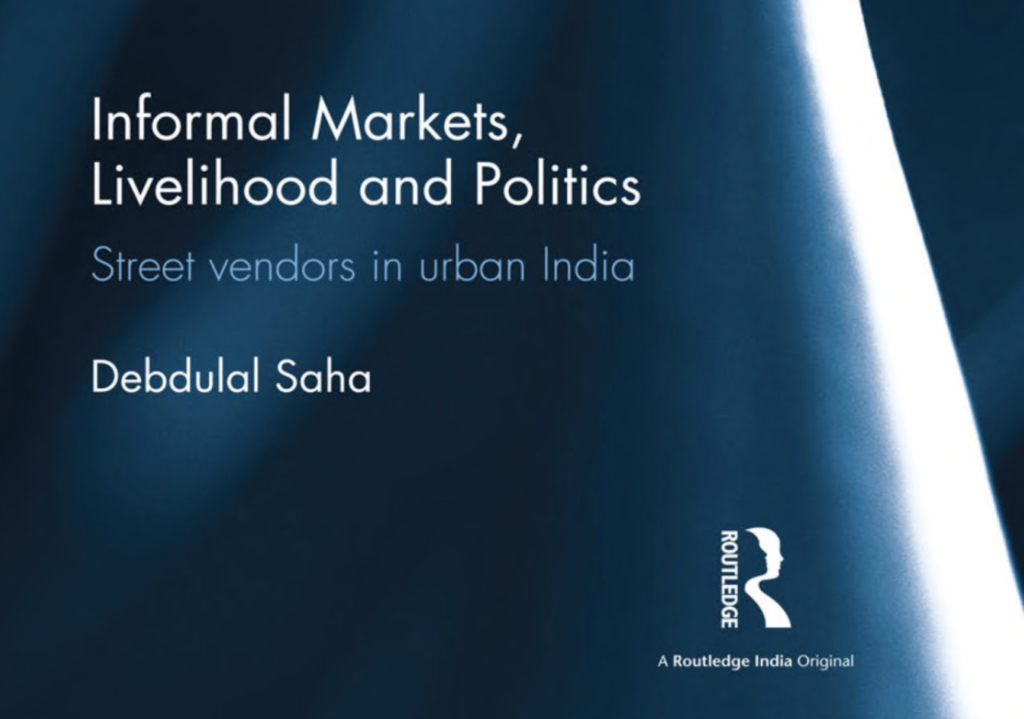 Even as ‘informality’ has become a valuable point of study when it comes to the developing world, so much so that any study of the Global South is “inconceivable” without using the concept (Goodwood, 2016), street vendors haven’t exactly found favour as a point of analysis. Although the last couple of decades have triggered scholarly interest in street vending in India, very few studies have taken the form of a monograph. Even as Jonathan Shapiro Anjaria’s Slow Boil (2016) provides an ethnographic account of street vendors in India, it was limited in its scope because Shapiro chose to base it on the city of Mumbai alone. It is this lacuna in the sociological understanding of street vending in India that Debdulal Saha’s Informal Markets, Livelihood, and Politics: Street Vendors in Urban India aims to fill. As a scholar of development economics and labour studies, Saha’s extensive work covering 10 cities across India’s varied linguistic and cultural diversity offers a wealth of quantitative data collected from the ground, along with a reasonable amount of qualitative data, to provide unique insights into the lives of the most visible form of informality in India today.

In informal Markets…, Saha explores the lives of street vendors in urban India to study their “strategies of survival and sustenance” (Saha, 2017, p. 1). Several aspects of these strategies are explored, including the structure and characteristics of informal markets in India, the politics and survival strategies surrounding public space, the precarity and vulnerability of street vendors, the negotiations and collective bargaining that vendors undertake both successfully and in vain, and the challenges of legislating this domain of informality in contemporary India. Two heuristics that are prevalent throughout the book are the instrument of bribery – its modus operandi, uses, and flexibility – and vendors’ access to credit. Even as their use seems repetitive at some points in the text, Saha manages to add minute details at each instance in order to provide more insight to the tussle between the vendors’ informality and the state’s indifference to their struggles.

Saha’s stance on the debate between formality and informality, which he addresses in the introduction and the first chapter, sets the tone for the book. For Saha, it is the lack of employment opportunities in the formal sector that pushes people into undertaking informal jobs (Saha, 2017, p. 55). He points out on several occasions that the profession of vending needs little capital, education, and skill. Even as he cites copious data to suggest that the size of the informal sector in India outstrips that of the formal (almost to a ratio of 9:1), Saha argues that informality is a failure of formalization. It is no wonder then, that he is in favour of regulations from the state to reign in informality. However, Saha is also appreciative of the possibility that policies and regulations could be disconnected from ground realities. Taking the case of bribery, for instance, he documents how extensive the network of bribery is in several cities across in India. It cuts through several layers of bureaucracy and is a fact that is taken-for-granted by both the vendors and the officials they interact with on a daily basis. Looking into the Street Vendors Act (2014) and its provisions, Saha remains unconvinced that it could, even as it aims to provide licences to vendors at some cost, fully root out bribery. However, he provides no solution to fill this gap between the intent of the state to formalize and the potential issues in its enforcement.

Methodologically, Saha’s focus has been on collecting extensive data on various variables across 10 different cities in India. Data varies from basic parameters such as gender, religion, social group, marital status, age distribution etc. to more contextual ones such as the types of products sold, credit providers, storage conditions of unsold products, customers’ perspectives on vending. Around 2,000 vendors have been surveyed across 10 cities, making this body of data the first of its kind. While quantitatively robust, Saha’s analysis of this vast body of data falls short of expectations. For instance, when talking about the setup and composition of the Dadar market in Mumbai, Saha mentions how the market begins at 4 am daily as a wholesale market, mostly patronized by both brick-and-mortar retailers and vendors. He moves on to note how roughly four hours later, the impromptu wholesale market converts itself into a retailer’s market, welcoming regular officegoers and other individuals. Unfortunately, this routinized shift in practices of a working group is left under-analysed, with the continuities and discontinuities left unexplored.

Nevertheless, what Informal Markets…misses out on the sociological analysis of its extensive data, it makes up for in terms of its analysis of what Saha identifies as an inextricable and politically crucial aspect of street vending in urban India: the notion of public space. Saha’s discussion on public space, its links to both the everyday aspect of vending, and the more surreptitious links to bribery, and survival strategies of vendors with several actors are the strongest parts of the book. In a chapter dedicated to public space, its politics, and the survival strategies that vendors are forced to adopt, Saha develops the idea that the public space occupied by the vendor – be it legally or illegally – is her “capital” (p. 104). Siding with the long line of Marxist thought that associates social relations to public space, Saha argues that a vendor exercises two kinds of bargaining with the space she occupies – economic and social. Economic bargaining is defined as the capacity to negotiate over rates of interest on borrowing with credit providers and the rates of bribery on offer to civic authorities. Social bargaining, on the other hand, is also seen to be crucial, as it is the basis on which the vendor builds social relations with different actors such as customers, other vendors, and moneylenders. The sole consideration available to the vendor is the public space she occupies. Noting how the state denies the vendors any legal rights over the space they occupy, Saha also points out to the blatant corruption in practice, by citing an example of a market in Mumbai where civic officials have been charging unofficial rent from vendors, thereby indirectly legitimizing the vendors’ occupation of that space. At this juncture, he raises the crucial question of whether the state would do well to legalise vendors’ usurpation of public space in order to control their rapid growth and earn a legitimate income. Fieldwork across 10 cities, however, underpins Saha’s scepticism towards a solution, at the root of which is an extensive analysis of bribery as a socially networked phenomenon. Saha expands upon the types of bribes, the relationship between the products sold by the vendor and the nature of the bribe, the role of intermediaries (individuals, typically gang members used by state officials to collect bribes), and the demand-driven process of bribe payment. This leads him to conclude that the entire network of bribery acts under the radar of senior-level bureaucrats. The conclusion not only demonstrates that the ones working on policy measures are unaware of the way their own subordinates treat vendors, it also challenges Lipsky’s concept of “street-level bureaucrat” (Lipsky, 1980).

In summary, Debdulal Saha’s Informal Markets… stands tall as one of the foremost sources for data relating to street vendors in India. With 2,000 vendors interviewed, Saha manages to compile a source that is bound to be useful for researchers for several years to come. However, the book’s limitations include its lack of depth in analyzing certain well-identified phenomenon. Additionally, with the book being published just a few years after the promulgation of a landmark legislation relating to street vending, some of Saha’s access points to vendors have been negated. Nevertheless, Informal Markets, Livelihood and Politics: Street Vending in Urban India is an invaluably important contribution to research on street vendors in urban India.