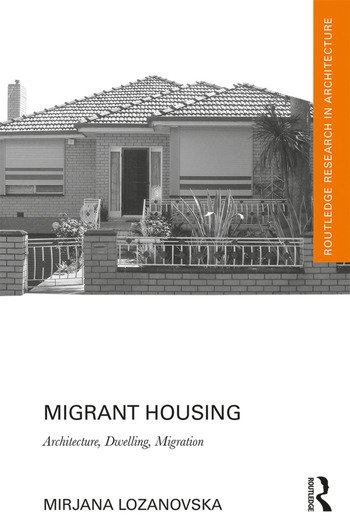 In the book Migrant Housing: Architecture, Dwelling, Migration, Mirjana Lozanovska examines migrant houses as the transcultural architectural construct in the process of migration (p.1). Lozanovska focuses on the postwar migrant housing (1955-1975) of working-class immigrants in two migrant sites—the village of Zavoj in the Republic of Macedonia as a place of departure and the city of Melbourne in Australia as a place of arrival. To explore socio-cultural and architectural aspects of migrant housing stories, the author analyzes different forms of architectural documentations—ranging from drawings and plans to photographs and diagrams—of the vernacular (existing everyday) and new migrant houses in the two sites. In her book, Lozanovska emphasizes both ways of the migrant housing trajectories; the author argues that the migration process not only produced variously adapted architectural manifestations in the place of migration, but also modified the character of housings in the place of emigration.

The concept “twin houses” suggested by the author in the last chapter of the book epitomizes this co-existence of two entirely different phenomena of migrant housing. Lozanovska documents and analyzes the “twinness” of migrants’ houses with local vernacular housing in both Melbourne and Zavoj. For instance, migrant housings in Zavoj show twin-like sameness and differences in material, structure, and construction technologies with existing traditional housings; both housing types share almost identical housing model and home-making desire while resolving these issues materially between different cultural contexts. According to the author, this twinness of migrant houses as distinctive diasporic aesthetic is what transnationally links the two different places, the cities of immigration and the homeland. In so doing, Lozanovska attempts to move away from a binary (a dual “other-center”) framing in understanding cultural hybridity in architecture and further emphasizes the parallel existence of multiple realities of migrant architecture.

In the book, Lozanovska not only redefines the meaning of vernacular (everyday) architecture as on-going and ever-changing process in the context of cultural hybridity, but also decentralizes European-centric architectural historiography by including specificity of migrant stories from marginal places. However, the title of the book using institutional or generalizing term “migrant housing” does not seem to properly address Lozanovska’s focus on specificity of migrant housing—migrant housing models and stories produced under distinctive diasporic conditions of Southern European migrants in Melbourne and Zavoj.

I would recommend this book to anyone who is interested in topics ranging from migration and transcultural architectural productions to comparative methods in the discourse of hybridity. Particularly, the author’s empirical research on migrant housing is interdisciplinary, integrating theories and methods from cultural studies, ethnography, and anthropology with architectural theories. Thus, this book will also be inspiring for a broad range of students and scholars whose research is concerned with the interdisciplinary methods and their applications.