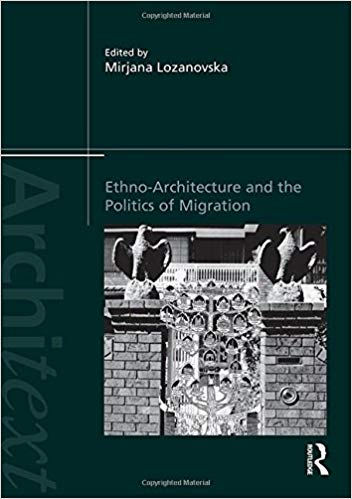 With a background of more than thirty years in teaching architectural theory and design, Mirjana Lozanovska – Associate Professor at the School of Architecture and Built Environment at Deakin University, Australia – offers a collection of contributions from a wide field of disciplines such as geography, anthropology, environmental studies, history, sociology and of course architecture towards a deeper understanding of what Lozanoska labels as ethno-architecture. In the introductory chapter, she defines ethno-architecture as recognizing “ethnicity as a signifying marker in the context of globalizing processes of aesthetic taste, design and construction” (Lozanovska 2016: 4).

Instead of on conceptions of migration and integration that strongly rely on nation-state paradigms and assimilation into pre-existing sociocultural contexts, this edited volume aims to offer different perspectives on place-making, global networks, remittances spatial orders and materiality with a strong focus on interdisciplinarity, always drawing from the relation between migration and architecture. Considering architecture as an identity-category and not merely as material or aesthetic manifestation of housing practices is another aim stated by Lozanovska. Central questions of this volume focus on issues such as defining architecture when looked at through the lens of migration, or examining the kind of field one encounters when thinking architecture and migration together.

The volume is divided into three main sections, each featuring four chapters by different contributors. Notwithstanding the variety of methods and disciplinary diversity, the overall narrative and order of the contributions do offer a clear line of argumentation and epistemology. Starting from ethnographic fieldwork, photo-analysis, discourse analysis to qualitative and quantitative methods such as (semi-)structured interviews, this multi-disciplinary collection offers an equally varied selection of methodological approaches. Yet the assignment of the chapters to each section does not appear fully comprehensible, especially concerning section 1 and 3 – “Ethno-landscapes of migration” and “Temporalities of migrant constructions”.The reason for this may be found in the fluid boundaries between both sections and their guiding motives.

As stated in the introduction of her volume, Mirjana Lozanovska aims to take a poststructuralist approach towards ethno-architecture and identity construction. By rejecting a methodological nationalism, and by looking at migration as a global phenomenon, the typical host-guest paradigm with assimilation of the guest into the host-society as the overall aim of integration shall be overcome. As the different contributions focus on a wide range of varying regional and geographical contexts, migration flows towards cities and peripheral areas as well as cultural practices in connection with ethno-architecture, it may appear equivocal for the reader to end up at Lozanoska’s conclusions: Ethno-architecture should be understood as a “compelling evidence that these structures are neither temporary nor transient, nor that their migrant inhabitants, adaptors and makers lack belonging” (Lozanovska 2016: 217).

As Ayona Datta shows in her contribution “’Where is the global city?’ – Visual narratives of London among East European migrants” (chapter 1), the visual representations of the migratory experience in London produced by the subjects of her research mainly show disillusionment of migration, that is “produced from particular physical landscapes of the earlier ‘desired’ city […]” (Datta 2016: 17). Also chapter 3, “Indian-American landscapes in Queens, New York – Ethnic tension and place making” by John W. Frazier reaches contradictory conclusions on e.g. how “place remaking by ethnic groups incites protests from existing residents” (Frazier 2016: 43). Also the abandonment of existing plans for building so-called Indonesian villages in different parts of the Netherlands for the Indischcommunity of mixed Dutch and Indonesian origin due to a lack of financial investments, which Marcel Velinga has dealt with in chapter 8 “A comfortable home – Architecture, migration and old age in the Netherlands”, does offer a different perspective on place-making, belonging, architecture and migration – a perspective different to the one Lozanovska conveys in her conclusion. The multiple settings of each case study – e.g. urban and rural settings, which can differ significantly, as several contributions have shown – are also contributing to a somewhat very extended set of conclusions one could be confronted with.

All in all, this anthology offers a comprehensive overview of a wide range of topics connected to place-making, migration, urban landscapes, ethnicity and housing, as well as temporality and space. The selection of contributions definitely meets the variety of aspects that could be dealt with in the context of the overall topic of ethno-architecture and migration. The entire book is written in a well understandable and accessible language which guarantees that also non-native English speakers can make use of the contents for their work. Scholars from a wide range of fields – not only from architecture or migration studies – may gain profitable insights for topics such as globalization, remittances, the public sphere, security & surveillance, everyday life, materiality & the home, cuisine and multiculturalism in general.