Dominant religious institutions have, historically, had strict normative boundaries, especially when it relates to gender. Technology and globalization, through the media, may have instilled what would be referred to as “unorthodox” religious views and perspectives on gender and its preexisting constructs. Focusing my argument on Islam, present day media outlets have certainly impacted the voices of different genders and potentially their roles, creating a “modern Islam” that is better adapted with the world and views from around the world. It is worth noting, however, that the media has consecutively created wider space and reach for religious authority and political religious authority, as will be elaborated further in this book review. Capturing such opposing roles the media plays relative to gender and religion remains a challenge.

One of few books that relate media, gender and religion while taking into account social constructs on sex/ gender similar to Butler’s1 concepts of regulatory materialization of gender and gender performativity, Mia Lovheim’s “Media, Religion and Gender” can be considered a breakthrough across several distinct but overlapping fields. Drawing on historical concepts and theories, the book is an attempt to bring third wave feminism and gender into front centre of its research that is rooted in academia yet based on participatory and reflexive research. This book had an overarching goal of challenging research gaps on the interrelations between gender and its cultural/ societal constructs, religion and the media. Contributors to the book covered a wide range of topics including theoretical perspectives as well as more detailed case studies of different religious views in the media; drawing on examples from various parts of the world.

The book has an intense introduction that covers provocative and controversial topics from around the world (e.g. the girl in the blue bra – see image above) as well as thorough analyses of the literature and of research methods, epistemologies and methodologies, however, the rest of the book doesn’t echo this. Most chapters (or case studies) that follow only provide a subtle analysis of gender performativity in their discussion, with the exception of perhaps chapter seven. The main discussion revolves around agency and female voices contributing to forms of religions that go against “… the experiences and interests of a male, religious elite” (p.6).

In an analysis of gender and Islam in the media, is it sufficient to look at the role social media plays in highlighting female voices in religious debates and regard that as a novelty only made possible through technological advancements? Growing up a Muslim, in a fully muslim household, in a patriarchal muslim majority country with Shari’a2 mandated judiciary system and constitution, the voice of women in religion has always been inherent and prevalent. Most of my personal values and religious views come from my mother’s teachings, my grandmother, my aunt, or my female religion teachers at school. Social media may have facilitated linking women’s voices in Islam (e.g. weekly halaqas3, Qur’an recitation sessions, religious seminars, etc.) but it is rather unjust to give it the credit of establishing their voices.

Chapter nine, “Claiming religious authority: Muslim women and new Media”, provides a shallow investigation of the question posed in the previous paragraph. It only examines how social media allows women to discuss their own interpretations of religion; barely mentioning the complexities that accompany any opinion which would be considered “unorthodox” and doesn’t follow the patriarchal, dominant Islamic interpretation and knowledge. Social media, particularly in the Middle East, is regularly used as a tool by authorities (and in some cases the public) to practice their policing “rights”. Radical Islamist contributors as well as modern Islamist ones are often stereotyped and many face sentences for their posts. More drastically, women or men who identify outside classical gender/ sexual orientations in these societies generally have their rights stripped away from them (literally from residing in the country for instance, and figuratively from participating as any other member)4. Yet, LGBTQ communities have existed in the Middle East for ages with a large, unspoken acceptance from society, but most of them prefer to stay out of the media5.

The agency of religion remains in its patterns of authority and normative boundaries, which include more unspoken tolerance, acceptance and variations than one would imagine. Despite examples in the book of otherwise, global media and the public will not give agency to an individual and their own views on religion when they are involved in a controversial incident. On the contrary, they will be associated with their “apparent” religion and its dominant patriarchal interpretation. Referring to the case of the girl in the blue bra, she was instantly identified as “Muslim” and while she was celebrated by many for her courageousness, the mainstream discussion attacked her for her “anti-muslim” actions of putting herself in that situation – while wearing a “sexy” bra. Perhaps an argument can be made here, which did not occur to Lovheim, that the military officers ignored gender constructs and religious materialization and treated her with such cruelty that goes against all contextual social norms and gender-related discourse? that remains unexplored territory and a liminal question to be considered in future research.

Regardless, this is not to say that the media did not have a role in changing religious associations and practices. There is no doubt that research on gender, media and religion is far from established, as Lovheim concurs, which indicates the criticality of this early stage in forming trends and patterns in academia or otherwise. Lovheim’s book can be found guilty of practicing some of the activities she warns against. More people than ever before consider themselves to be “spiritual, but not religious” (p.170), exploring the role of the media in that spiritual process might require alternative thought processes and case studies. Overall, the book establishes groundbreaking research patterns and offers critical insight on the interplay between media, gender and religion albeit rather requires more effective examples from societies around the world. 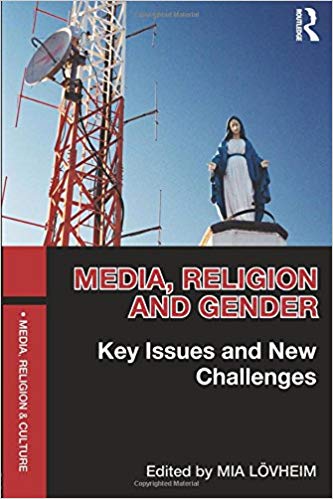 5 This might be regarded as a better case study looking at the role of media on gender performativity and gender roles in a muslim society. These are a few news articles on issues revolving around gay marriage in Islam and the overall acceptance of homosexuality. It would be worthwhile to read these articles as well as public comments on them for better context, where available:
Amrou Al-Kadhi, “After one of Britain’s first gay Muslim marriages, let me tell you what it’s actually like to be a gay Muslim,” Independent, July 11, 2017, https://goo.gl/Jtyrks.
CarolKuruvilla, “American Muslims are now more accepting of Homosexuality than White Evangelicals,” Hufftington Post, August 1, 2017, https://goo.gl/m1w24T.
John R.Bradley, “The Muslim World is More Tolerant of Homosexuality than you Think,” The Spectator, October 28, 2017, https://goo.gl/xzUkJ7.
Shahzeb Jillani, “Imams help gay Muslims embrace new social identities,” BBC News, July 13, 2010, https://goo.gl/Rp63L7.
Stephen Johnson, “Muslim activist claims the Koran SUPPORTS gay marriage,” The Daily Mail, August 13, 2017, https://goo.gl/aXP73Y.