In Jakarta: Drawing the city near, AbdouMaliq Simone offers 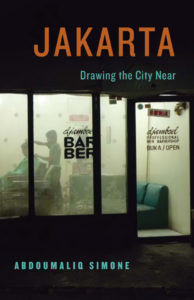 an inside-out perspective to understand the unknown realities of conventionally known urbanization process and everyday life of urban common in cities. Based on his meticulous ethnographic field study in three districts in Jakarta, Simone has produced a new spatial language from ‘within’ the city to read the distinctive trajectories of urbanization of the metropolis in the global South.

The book is structured around four inventive concepts: Near South, Urban Majority, Devising Relations and Endurance. Near South is introduced as a provisional devise to indicate how major metropolises of the non-West are moving toward or away from each other. In that sense ‘near South’ is an ‘interstitial space’ that is neither of the North nor of the South. Simone locates most metropolises in the near South to critique the binary opposition between the ‘developed’ North and the ‘underdeveloped’ South. He stretches ‘nearness’ beyond the comparison between cities and highlights that ‘certain residents have the opportunity to build specific ways of life (p. 35).’

Among the proliferation of mega-developments and emerging middle class in contemporary Jakarta, Simone draws attention to the ‘urban majority’, the residents who really bring the ‘nearness’ and shape the city by occupying and changing its spaces in their everyday practices. The urban majority is not a demographic fact or a political identity but refers to the residents who live in between strictly poor and middle class (p. 85-86). Instead of pursuing the aspirations of middle-class status, Simone shows that how the urban majority transforms urban spaces through ‘incremental’ initiatives, the actions of the residents that do not aim definitive results, but to make ‘something’ happen such as expanding a house to rent out rooms or construct a mosque in the neighborhood. Although such efforts seem simple or mostly negligible in mainstream urban theory, they are, Simone convincingly demonstrates as the ‘machines of support’. That generates not only income and opportunities but also multifaceted social, cultural, and economic networks and negotiations among residents in the city (p. 111 -114).

Yet, the close proximity or increasing density of buildings, objects, and bodies in cities do not necessarily guarantee relations. Simone thus brings the concept of ‘devising relations’ to examine the dynamic relations between inhabitants, materials, and particular spaces in Jakarta. Then he introduces metaphors such as ‘the hinge’ and ‘the hodgepodge landscape’ to emphasize how these relations allow the city to follow global urbanization trajectories when the heterogeneity of their urban spaces remain same in terms of their social composition and use.

The concept of ‘endurance,’ denotes the way in which the majority of residents continue their lives while dealing with extreme uncertainties – both dangers and opportunities – in their everyday urban life in Jakarta. Instead of being very conscious on their identities, residents focus on the possible opportunities of their daily routines and employs deception as a method of endurance in everyday urban life.

Ultimately, Simone connects his learning from an inside-out perspective in Jakarta with contemporary urban theory and policy. He necessitates the integration and enrollment of residents’ views, aspirations, and the way in which they shape spaces, in urban policy making to ensure the long run of cities. Instead of relying upon the contemporary urban theory, Simone has theorized Jakarta. His work profoundly validates the residents’ life and their contribution to continue the heterogeneous urban life of the city.