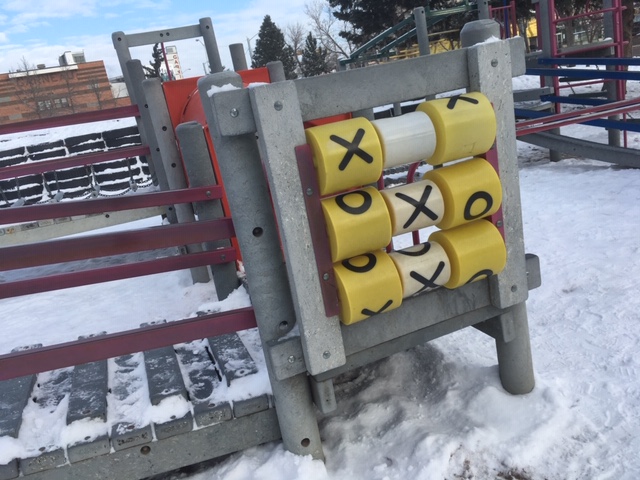 Winter photos, pure nostalgia, memories of meeting friends here – away from the U of A campus. We’d usually get together at this playground before leaving town for the summer. Next stop the airport!

Like Bakhtin’s carnival, playgrounds offer a “temporary liberation” from the established order of things (Bakhtin). Anton Vinogradov’s installation A Place Where I Skipped School (2019) evokes Bakhtin as well: “I used to skip classes near the high-water bed of the river behind my home. It was like an adventure described in books” (Vinogradov). He adds: “By playing in that space, free from the pressure of city norms and big historical and modern narratives, liberation happens and the space for art is revealed” (Vinogradov).

Compared to Vinogradov’s lightboxes that illuminate each picture like a magic lantern, my photographs might appear more modest. But photography has its own distinct advantages. “Movies and television programs,” Susan Sontag writes, “light up walls, flicker, and go out,” but the photographic image is “an object, light-weight, cheap to produce, to carry about, accumulate, store” (Sontag). Sontag refers to Godard’s film Les Carabiniers (1963), in which, to their wives’ dismay, the two protagonists return home from the army service (a service that came with a promise of vast riches) with a suitcase containing only the postcards of places they encountered on the road.

The moral of this fable, Sontag points out, is that photographs “really are experience captured, and the camera is the ideal arm of consciousness in its acquisitive mood” (Sontag). This might explain my stubborn excursions, cold Alberta winter notwithstanding, to this playground on 109 Street: “To photograph is to appropriate the thing photographed” (Sontag). With these photos safely stored on my iPhone, I am invincible. Note to self: Keep the iPhone charged at all times.