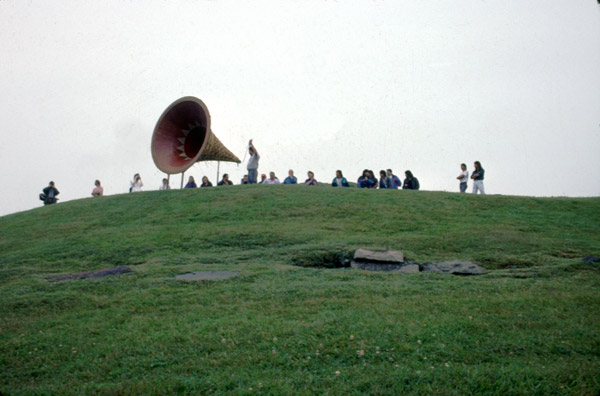 “How does a world sound?” begins Sounding Bodies, Sounding Worlds. Mickey Vallee deploys media technologies to examine sound as a bridge across bodies, species and materials. This holistic approach considers “transacoustic communities” that transcend local space, transgress boundaries, transfer information and transduce the auditory and visual. Sound creates a topology, a spatialization that is distinct from the contours of built spaces or a natural landscape.

“Sound does not arrive without the infrastructure that anticipates its arrival, and as much as sound arrives to give us information about the system from which it emerges, it remains an integral part of how that system holds together. We cannot shut our bodies off to the vibrations that surround us. But we can turn our attention towards the direction of these vibrations and make sense of the material systems with which they resonate” (1). Vallee explores the thresholds of the heard and the unheard, sound and unsound.

Sounding is a bathymetric term measuring depth. Vallee cites Helmreich’s 2015 use of the term to describe “how we bring the unknowable into the limits of the knowable… bringing things outside our field of vision into view through sound, how to generate a world that is known.” (3)

The Sounding Book as it has come to be called around me, develops Jussi Parikka’s program to consider bodies as expressions of interactions with their environments. This includes the reproduction of sound and methods for understanding these acoustic embodiments. Across a series of chapters, Vallee considers human and animal voice, communities, digital data sounds, and geo-acoustic vibrations.

Acoustic embodiment and propagation are technically generated and laboured, concrete and situated in context. As such sound is material in both its generation and propagation. Resonances and responses are realized through infrastructures of audibility that include animal, plant, geological and machine listeners and listening apparatuses. The production of vibration by bodies has been analysed by dissection of the materials and actions of body parts such as the nasal cavity. “Infrastructures of audibility” refers to the labour and means that allow sound to propagate and be comprehended beyond merely producing sound. This leads to analyses such as Vallee’s discussion of the “voicescape” as a topological relation between the body and the environment.

What is sounding? Listen: http://listen.hatnote.com/

Listening is actively tied to attention, attending to available or disclosed information. This makes a broader sensorium which is measured but nevertheless connects unconsciously to affect, to the nonrational. Listening as attention links sounding to discussions of agency. There is an ethics of sounding that involved embodiment, technology and collectives or assemblages as sound links source to the perceiver. As a social practice, listening is embedded in ethical situations and moral injunctions that betray stereotypes and inequality – “don’t listen to him!” “Don’t believe what you hear.”

The voice is treated as a virtual or what Vallee calls an “imaginary organ,” by which the body extends its reach not only into an environment but into a world which is always social, including for animals, in that it includes listeners. Voice is an effect as well as an affect of the body, ideal but made actual.

“The topological folds of the body fuse the spatial, the temporal, the animal, and the technological on the cusp of communicability. If the infrastructure of audibility spans the voice outward between bodies, institutions, species, entities, and objects, it thus demands that we think of it as relational.” (62-3)

Listening was once at the centre of human experience but has become displaced to nonhuman and technical assemblages, becoming a computational and technically mediated. Vallee argues that listening, in different forms, has emerged a shared trait or medium across sciences and technologies as a way to make sense from the interior of bodies and environments. Sound studies is at a crossroads where sound and vibration become more clearly a method for investigating reality rather than sound being the main content itself, as in the case of non-destructive testing of metals by analysing how they diffract light while subject to ultrasonic vibrations. This spatially and temporally expands the definition of sound and sonification.

In addition to recognizing the expanded relevance of sound and the expansion of sound itself through sensing devices and the senses of species able to detect frequencies beyond human capability, Vallee follows Pinch and Bijsterveld’s 2012 argument that sound connects to other senses through syntheses (e.g., sonic visualization), that is through transduction that renders sound as vibration into another form such as a visual or even touch display. “The virtual, the haptic, the affective—in short, that which vibrates beneath or above the surfaces of perception— are making their appearance within disciplinary streams beyond sound studies, where they participate in explorations of disparate sets of concerns.” (11)

I am struck by the continuities between senses: vibration is a continuous frequency spectrum complicated by the resonance of overtones, the amplification of certain frequencies as echoes pile up sound waves and the sympathetic vibration of other objects in an acoustic environment. Through sight, sound and touch in particular but also sensitivities to electrical fields (notable in sharks), bodies have specialized in producing and responding to specific stretches of this spectrum with different organs. Bodies move in dynamic media, buffeted and massaged by continuous vibration.

Sound belongs to spatiotemporal networks and ecosystems. In spatial terms, the book considers the spatial extension of the human body through movement and gesture that do not fill but rather they define and shape a space; they spatialize. Understanding sound as spatializing enables insights into alternative spatializations and world-making.

When I think of sounding, I think of Rebecca Belmore’s megaphone sculpture and performance art, which asks people to speak into one end of the instrument and speak to the world beyond of colonialism and racism. The piece is a response to the Oka Crisis and positions Indigenous voice on the land. This speech is to their mother: Ayum-ee-aawach Oomama-mowan. Their mother is the world, and speaking propagates a new spatialization, a new arrangement of memories, meanings and places.

Helmreich, S. (2015). Sounding the limits of life: Essays in the anthropology of biology and beyond. Princeton: Princeton University Press.