A shoutout to Sam Kinsley’s site Spatial Machinations.  Its reach across contemporary theory and global issues more than fulfills it ambitious mandate to chronicle and catalogue how media produce temporalities and spatialities.  Recent discussions of affect theory and geography, American military visions of cities as dystopic are typically engrossing and on point.   However, taking the time to archive a missed event – I just picked up “Paramatta”, so inferred its not only past  but was far away (suburban Sydney Australia), gives us not only an echo of an event but flags important insights such as the declining rate of innovation.

A typical gem of a post is the 2009 ‘A Vision – Simon Armitage’: which draws on Simon Armitage‘s Tyrannosaurus Rex Versus the Corduroy Kid a lyrical contrast between a found architect’s rendering and a bleak-looking photo of Thamesmead, a huge Brutalist housing project in SE London. 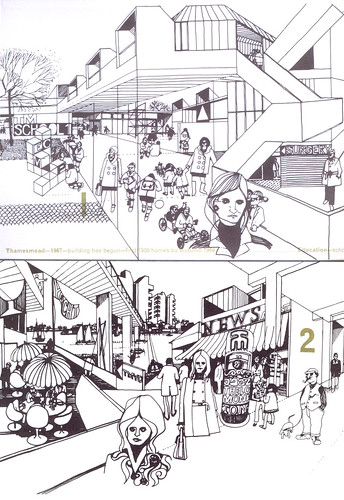 Thamesmead was the setting for Stanley Kubrick’s A Clockwork Orange.  There is little online in photographs that capture the social life of the development.  Thamesmead seems stuck in black and white 60s and 70s, including the outstanding photography of George Plemper.